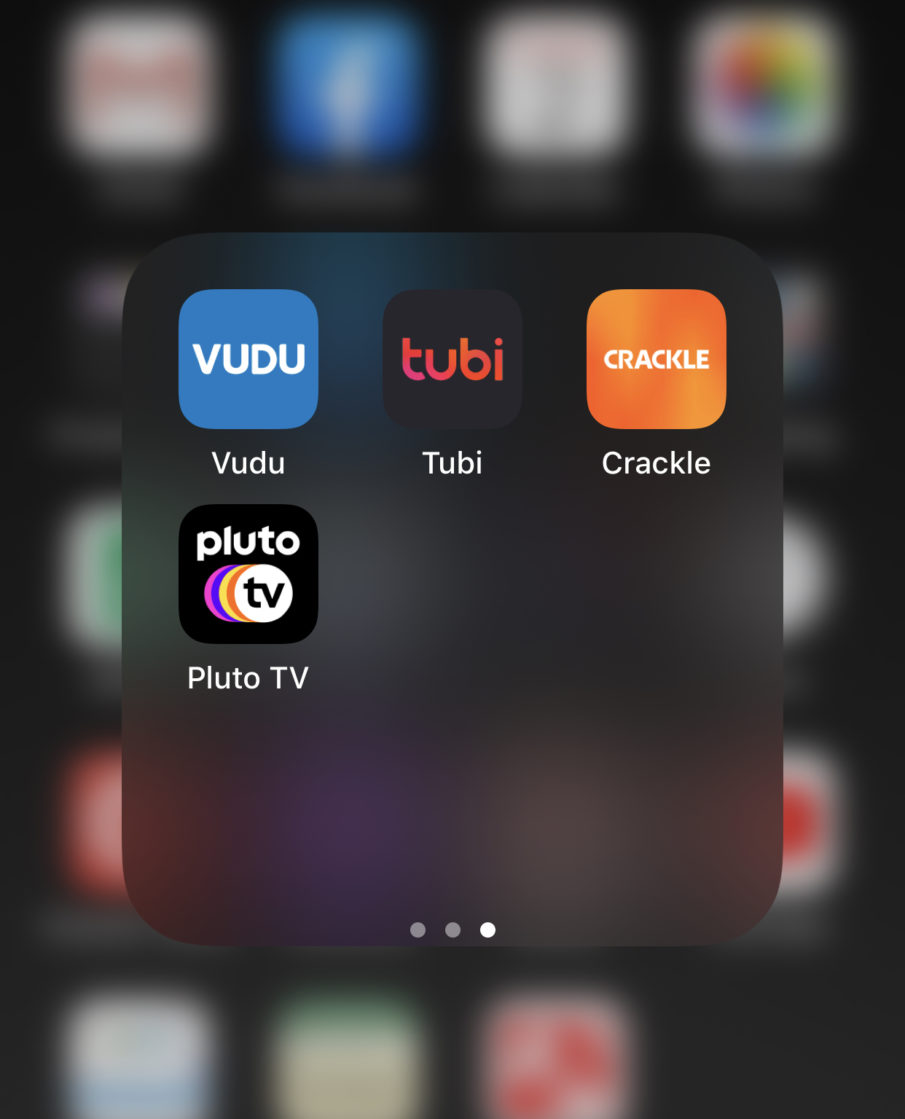 So maybe I’m a glutton for my own punishment tonight but this is a topic I’ve been meaning to write about for a little while now. I’ve actually started this topic once or twice but hadn’t seen it through to the end. Right now we are overwhelmed with streaming services and it seems like a new one pops up every other day. Sure, there’s the main stage performers like Netflix and Hulu. Amazon Prime has done a remarkable job in recent years by beefing up their catalog of other properties to watch as well as really constructed some excellent content on their own. And with last fall’s launch of Disney+ there’s a seemingly never ending barrage of content to pick from plenty of places. Somehow, with all of that already in play, there’s still other sources that aren’t traveled anywhere near as much. So I wanted to take a moment to highlight some of the ones that I’ve come to appreciate over the last couple of years. Oh, and the best part of all of them? They’re 100% Free

The first one I’ll mention is one I’ve been recommending to people for years. Its the Walmart partner “Vudu”. I think many people thought it was simply a source for purchasing movies to own but that’s hardly the case. They have an expansive free catalog of both movies and TV shows. What I really love about this service is how versatile it is. This is where I do access my entire streaming library of titles I own as well as a number of free titles. Vudu makes purchasing movies really easy with frequent sales and great prices on digital copies of films. They offer a “Disc+Digital” through their partnership with Walmart where you get the digital copy of the movie instantly upon purchase as well as a hard copy mailed to you when the film is released on home video. This usually presents me with a second digital copy of the film I could sell for a few bucks back in hand but usually I give it away to a friend so they can enjoy some of the same films I do. They also offer the Disc TO Digital library. They have an expansive catalog of films that if you presently own the hard copy, you can convert it to a digital copy for either $2 or $5 depending on what format you own it in and what level of definition you’d like the digital copy. This is a great way to make your library more shareable as well as portable for when you are traveling or stuck somewhere and can stream on your phone. They also allow you to share your account with a fixed number of other individuals and devices so if you buy a movie, you can share it with your entire family. I buy a lot of movies shockingly, and this venue gives me the opportunity to share those titles with family near and far. This just gives me a broader audience to chat with about new releases. So Vudu is a totally free service you can use to stream a number of great free titles as well as central place to house a growing digital collection. And with it being part of the Movies Anywhere family, you can link your other digital libraries you may have with Amazon or Apple and view them all in one central location.

Next up I’m going to throw some love towards Sony’s free streaming platform called “Crackle”. This one has been around for a few years and has a rotating library of films. Usually they are a little older but I’ve been very pleasantly surprised by the reach this platform has had at times. There’s not too many real recent releases but as you scroll through what they have to offer, I will guarantee that there are movies you’ve not seen in a while that you’ll find yourself saying “I remember this movie!” or “Oh man, I haven’t seen that one in forever!” I think this is why this has been a go-to service I’ve used when I’m in the mood to shake it up a little. I know Crackle is going to have a handful of out of the way movies I’m not expecting to think of that will surprise me and I’ll undoubtedly find something that jumps out at me. In addition to these kinds of films, they have plenty of great cringey B Horror movies that are fantastic to watch when you want to laugh at how horrible some scary movies really are these days. Crackle has even put together an assortment of in house produced flicks and shows to try and keep up with the big dogs. There are ads to make these films free but they’re pretty manageable and not too intrusive.

Next up I’ll jump over to the service called “Tubi”. I just became acquainted with this service last year, I believe. I had seen it advertised here and there but initially doubted the claims of free and also didn’t think they’d have that great of a catalog for me to spend my time perusing. But as much love as I have for Crackle, Tubi really brings it when it comes to big titles that you’d want to watch. As with all the services trying to keep up with the big names, Tubi has a broad library which includes plenty of things you’ve not seen in a while, things you never even knew existed and a number of things you’d question why they exist. What I will gladly say about Tubi is that because its free, its hard to complain. And when I’m in that mode where I feel like I’ve seen everything I want to watch on the main streaming stages, Tubi is another fun alternative like Crackle that just has some different stuff to get lost in. There are ads as always but if you’re looking to expand your horizons, this is another stop I can gladly recommend as its benefitted me on more than one or two occasions.

Finally I’m going to speak on the newest addition to my family of streaming services I’ve entertained. Its PlutoTV. Much like Tubi, I had seen advertisements for it in a number of places as a “totally free streaming service” and was a bit leery on how free it was. It seems in 2020 that despite being actually free and telling people its completely free, I’m just so distrusting that I couldn’t quite believe it. But eventually my curiosity overcame me and I had to check it out. What I really enjoy about PlutoTV is that it has two modes of watching. There’s the on demand which we’ve come to know and love because it completely accommodates our lifestyles today but there’s also the “Live TV” function that I find myself watching more than the on demand. Its kind of fun to go back to watching things how I used to on television like I did when I was a kid. I will say that sometimes it can feel a bit ad heavy on this service but they have a solid library of on demand titles and a great many channels that feature constant movies and TV shows you haven’t seen in a while. This service also came standard on my new TV and I’ve really enjoyed watching a number of older flicks on it as of late. So I definitely give my seal of approval to this as another legitimate free streaming service to check out.

So that’s the list. I know there are probably a handful of others out there that I’m not aware of or haven’t used much like the IMDb steaming service. I know they have a somewhat decent assortment of titles you can stream for free through their app but that one is a little less popular on the Smart TVs and maybe a little more applicable to watching on a phone or tablet. I also haven’t wandered around it too much to make a formal recommendation. But if there are any that I’ve left off the list, feel free to reach out and let us know. As I said, I sort of stumbled upon each of these services and have found a lot of value in them when it comes to the movies that I get to enjoy watching across all these different platforms. So if you’ve burned through your watch list on all the services you’re currently paying for and still looking for something to pass the time, check out the apps I’ve recommended to see if there’s some movies out there you’ve not seen in a while or maybe even ever. I know you’ll have to sit through some ads and I’ll apologize in advance for that. But if the cost of watching a classic movie from your past is sitting through a handful of commercials, I see it as a pretty fair trade off. As always, I’ve been your Cinemaster to the North, Adam Peterson, and I’ll catch you on the flip side.

First off, you have to call me Nighthawk. Hopefully you know the reference but definitely respect the moniker. (Its from Step Brothers, btw) I am your host to the North of the Cinemasters. Forged deep within the belly of a drunken volcano struck by lightning from a passing comet during the autumnal equinox, the Cinemasters were cast into existence to bring awesomeness to the realm of movie discussion to all who would gather to listen. I am the knowing things half of our namesake and I do my best to guard the sacred truths and trivia of all the movies I have watched through the years. I am a father to two righteous dudes, ages 5 and 7. When not siring them in the ways of Cinema I am absorbing as much film exposure and knowledge as I can so to bring you fine people my offerings of the written word. Ryan Reynolds is my North Star in all things filmtastic and I pledge to give you the finest commentary written and spoken I can Cine-muster.
Previous Post Staff Picks 6/1
Next Post 44: Adam and Ron’s 10 Favorite Scoundrels, Anti-Heroes or Reluctant Good Guys